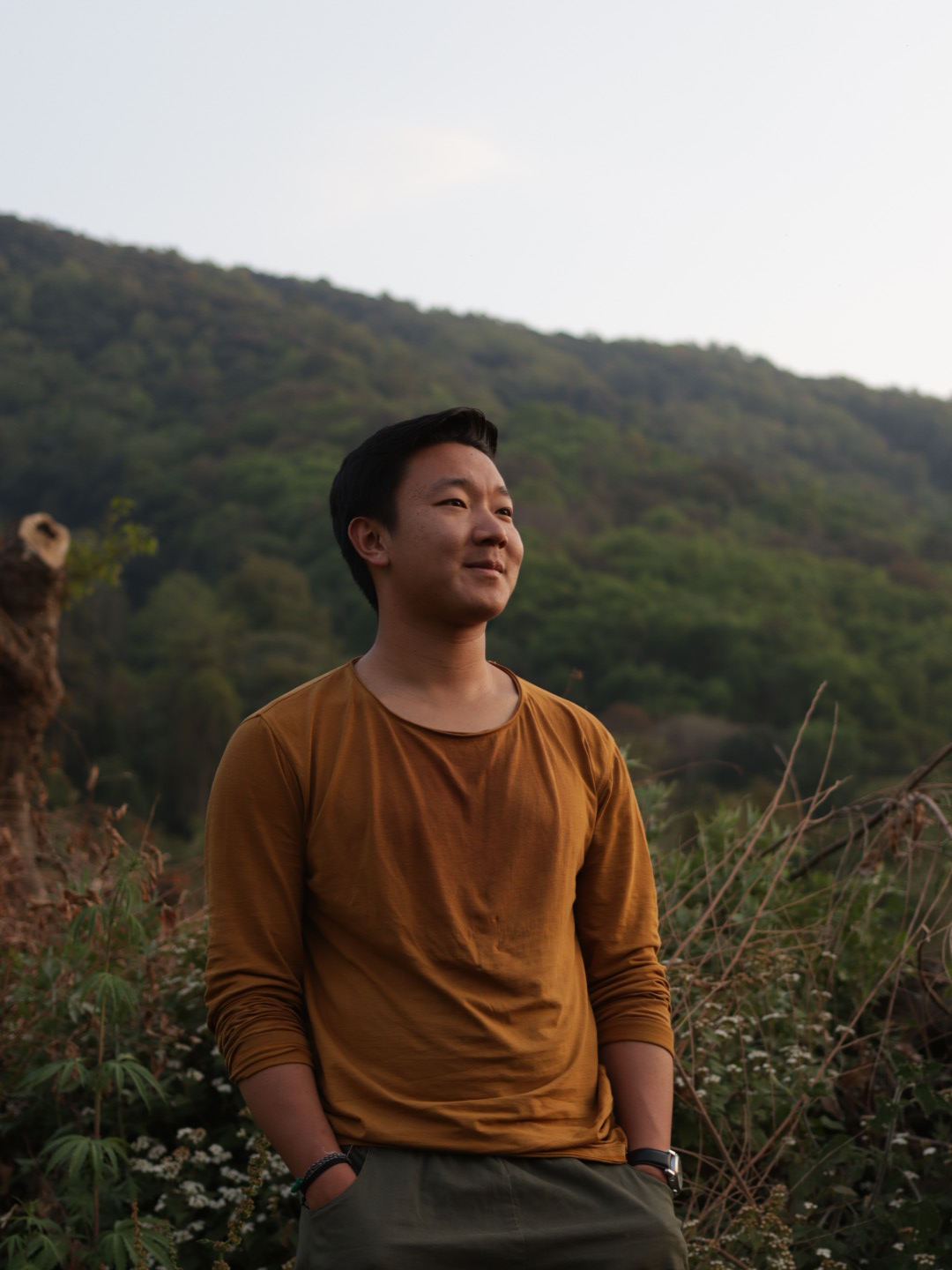 I woke up the next morning in high spirits having dreamt a good dream. The thinking ‘rational’ part of my brain felt silly that something as illusory and trivial as a dream should play such a huge role in dictating how our days begin and color the rest of our day. But then I remembered that our very country as we know it, was shaped within the dream of the great Zhabdrung Ngawang Namgyel who was guided south by raven-headed Mahakala. A small man like myself can afford the indulgence of letting dreams shape a happy emotion for the day.

As I got up, last of the three, and started folding my blankets I laughed all by myself at the events of last night; The storm that was raging over the mountains beyond Lamga lhakhang caught up with us as we were unloading the last of the bags and Zeus who was let loose found the new recipient of his terror from Kawajangsa taxis to half-grown pigs of Lamga. No longer did we sit down for dinner, than we heard squealing sounds outside. Worried, we slid the thick wooden windows open to investigate and we were treated to a scene straight out of the Tom and Jerry show!

Zeus was chasing at full speed in the pouring rain and nibbling at the back of a poor little pig who was running faster than an olympic sprinter. Having grown up his whole life in the urban city of Thimphu, this evening was literally the first time that Zeus had encountered the oinking fat fellow with black hair like his but hardened as though by the cheap Gatsby styling gel that angsty teenagers used to apply so religiously before good taste ever saw the light of day in Bhutan.

Chorten Tshering, i.e. the man of the house was a fellow sharchop, which was odd in a place so far away from any tsangla-speaking region of Bhutan and more ironically at a village in Wangdiphodrang which was connected by roads only less than a decade ago. Originally from Mongar, he had run away from his village because as he put it,

“Ngan (black magic) destroyed everything worth living for there”.

He came under the service of Gangtey trulku in Phobjikha, who used to own the rice fields at Lamga that would be cultivated and harvested during the season. During the off-season, he would go back to Phobjikha. However, eventually he found his love at Lamga and then settled permanently there.

Chorten Tshering, whom the villagers lovingly call ‘kota‘ (meaning ‘younger brother’) is now one of the prominent voices and leaders of the Lamga community. “Even if the elected local leaders say something, if kota or his wife is of a different opinion, the villagers will completely disregard the elected leaders” said a villager laughing through his doma-stained teeths. One could get the sense that the respect for kota and his wife rises not from an overnight one-hit-wonder stroke of luck but rather from a hard-earned place that has led the village gradually into prosperity over the span of years.

Ajang added, “If anyone in the village falls ill or sick, they know that they can always rely on Chorten Tshering, night or day, to help them. His bolero is practically their ambulance”. Here I realized, in a different part of the world where an ambulance ride to the hospital would put you in enough debt to have to work an entire year to pay the medical bills,

things could be so simple when hearts and mind speak the same language of love and care. How did some members of our human race stray so far?

If Chorten Tshering was a respected member of the community on one hand, he was an enterprising and forward-thinking renaissance man on the other. In many ways he reminded me of José Arcadio Buendia during the earlier parts of One Hundred Years of Solitude. Recently he had built another house for himself and his wife so that they could gift their old house to their son and daughter-in-law. Even more recently, he was building the first-ever tiled toilet! “Zai! It took me an entire day and my wife kept coming down to check on me and ask me why I was playing with cement and water like a small child?” he laughed. As I went inside to look upon the encouragement of ajang, I was taken aback by how professionally and meticulously it had been done! Here was a man, who had no experience in masonry who had lined up the edges of the tiles sharp and angular. Here, I remembered my beloved king, who had once spoken about his belief that Bhutanese people can do anything if we put our minds to it.

Ajang and Chorten Tshering traded a few words, ajang gave him some seeds that was advised to be planted in his freshly tilled garden beds and then we prepared for our half hour journey onward to Rukha valley. As we were leaving, Zeus who was tied to a post that brought his piggery expeditions to a halt, was sad and depressed. I told my cousin and ajang, more to reassure myself than them, that this would only last for a week at most and that afterwards he would truly taste the unbounded freedom of running the endless fields from his dreams in actual reality; because as we all know,

despite all our efforts to fabricate, superficialize and romanticize instruments of escaping reality,

whether through a self-centred obsession with social media accounts where we are all protagonists for an audience who all suffer from dementia; Or a pathological game of comparisons with everyone else to judge who is living the best life, that

at the end of the day, nothing cuts through it all like the warm embrace of another heart that loves.

So I let go of words, which are fabrications in themselves, and just hugged Zeus hoping I would cut through.

This site uses Akismet to reduce spam. Learn how your comment data is processed.